Learning while I Create the President’s Quilt 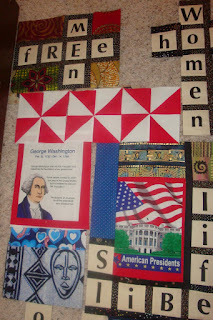 When the White House was nearly finished in late 1800s, President John Adams of Massachusetts was its first occupant. John & Abigail Adams did not own slaves !! The second occupant, Thomas Jefferson of Virginia, started a tradition that continued with other slave-holding presidents — they brought their personal slaves to help staff the White House.

In 1801, President Jefferson took about a dozen slaves from Monticello with him as he set up occupancy in the White House. Many lived in quarters on the White House’s first floor, while others slept on the second floor in the first family’s quarters. While largely overlooked, the role of slaves in building the president’s home has drawn some attention in recent years.
Posted by Bquiltin