"What a Wonderful World" [1970 Spoken Introduction Version] along with Oliver Nelson's Orchestra is a song written by Bob Thiele (as George Douglas) and George David Weiss. It was first recorded by Louis Armstrong and released as a single in 1968. Thiele and Weiss were both prominent in the music world (Thiele as a producer and Weiss as a composer/performer). Armstrong's recording was inducted in the Grammy Hall of Fame in 1999. Intended as an antidote for the increasingly racially and politically charged climate of everyday life in the United States, the song also has a hopeful, optimistic tone with regard to the future, with reference to babies being born into the world and having much to look forward to. The song was initially offered to Tony Bennett, who turned it down. Thereafter, it was offered to Louis Armstrong."Some of you young folks been saying to me," Hey Pops, what you mean 'What a wonderful world'?How about all them wars all over the place? You call them wonderful?And how about hunger and pollution? That ain't so wonderful either."Well how about listening to old Pops for a minute. Seems to me, it aint the world that's so bad but what we're doin' to it.And all I'm saying is, see, what a wonderful world it would be if only we'd give it a chance. Love baby, love. That's the secret, yeah. If lots more of us loved each other, we'd solve lots more problems. And then this world would be better.That's wha' ol' Pops keeps saying."I see trees of green, red roses tooI see them bloom, for me and youAnd I think to myselfWhat a wonderful worldI see skies of blue, and clouds of whiteThe bright blessed day, dark sacred nightAnd I think to myselfWhat a wonderful worldThe colors of the rainbow, so pretty in the skyAre also on the faces, of people going byI see friends shaking hands, sayin', "How do you do?"They're really sayin', "I love you"I hear babies cryin', I watch them growThey'll learn much more, than I'll ever knowAnd I think to myselfWhat a wonderful worldYes, I think to myselfWhat a wonderful worldOh yeah!
Posted by Bquiltin No comments:

Posted by Bquiltin No comments: 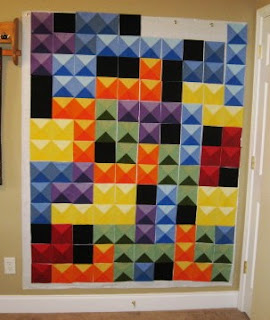 Posted by Bquiltin No comments: 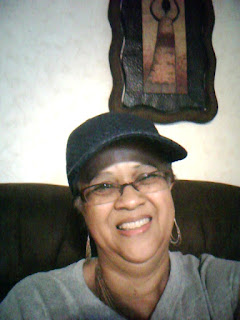 Just a Sunday at home with my family.....

Here's  my hosta... purchased it at Lowes... just a cute plant....  Officially it is a Patriot Hosta...medium sized Sport of Francee w/wider, more stunning, white margins on dark green leaves, a real show off as a specimen plant... (so the book says)!   In this regard, I planted it two years ago in the middle of the back yard to show off a bird/water stand... it didn't do so well with the sun and heat... and I think the hubby would slice the leaves off with his edger.. or maybe the neighbors cat messed over it.  So this year I wanted to save it, replant - restart in a medium sized pot, front yard shade and sun.   Just notice the two matching pots... One is ancient old, a little cracked and repainted several times as my daddy bought this urn (I have two of them) .... some old pictures may show the pot lived at the 4916 Wisconsin address/OKC. 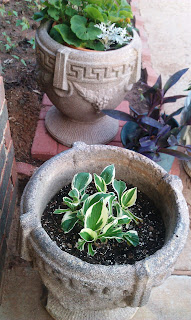 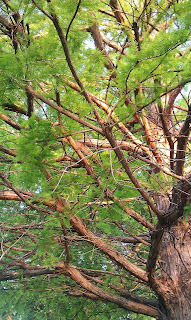 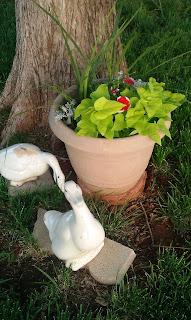 Every Spring I want to turn this quilting blog into a planting blog....   Then it gets Summer time hot... So quilting sustains me time and energy!!!......................
I drove with my girlfriend to pick up a quilt from a new  LongArm quilter....   I have a family slight-looking feud.... that I think I'll spread a little love and pull a quilt-top out of the closet to have it quilted.... binding... and mail off as a unique marriage gift!!! 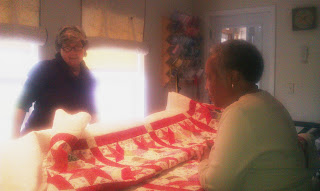